Build an Audience and Cultivate Community 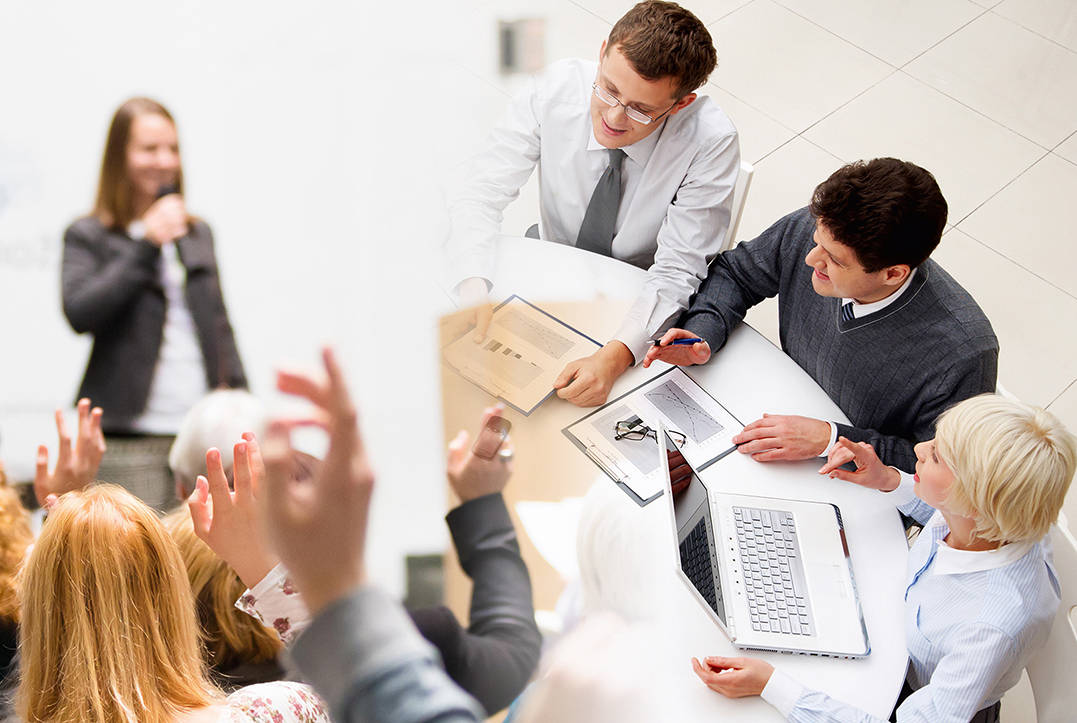 The emphasis on collaborative, peer conversations that demand mutual trust—along with the active brokering of connections and facilitation of conversations by the host—distinguishes communities from networks and audiences. As a consultant, make your expertise visible and build an audience. At the same time, keep an eye open for opportunities to cultivate a community.

What does it mean to host a technology-enabled community? After all, the LEGO brand hosts an online community, but so does Boom. Members of the former share an affinity for creative, toy building blocks. People who join the latter share a concern over their use of alcohol. The term community seems so malleable that much meaning can be lost in translation.

Our view is that there is a spectrum from an audience through a network to a full-fledged, collaborative community: 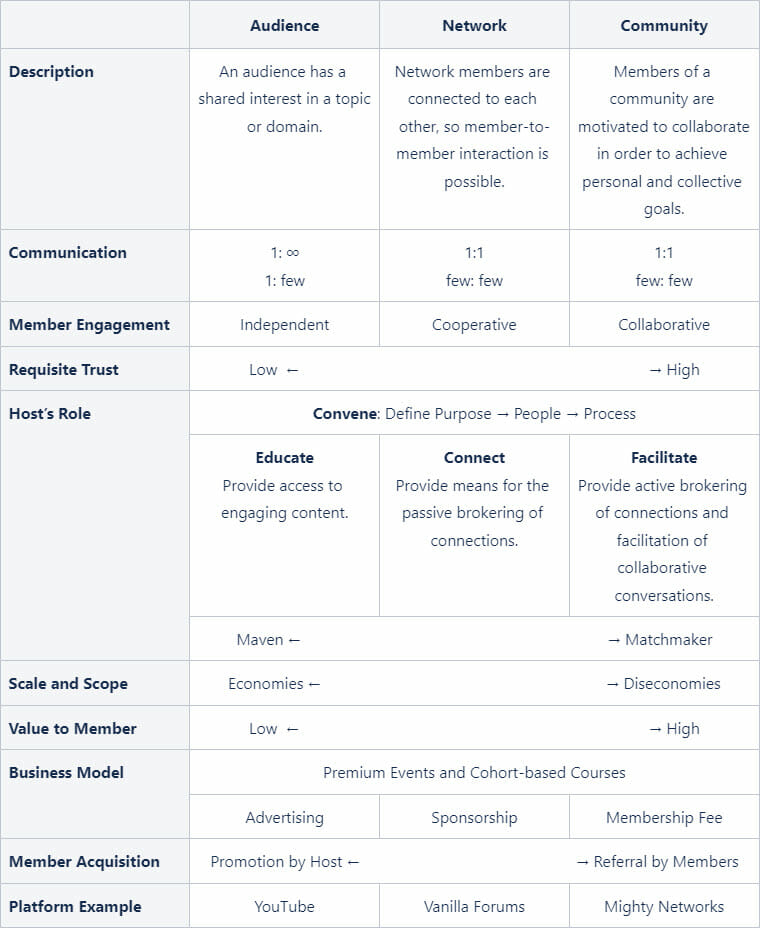 All are purposeful and utilize similar technologies. The lines of demarcation are fuzzy. Nevertheless, we at Human Scale Business perceive important differences in emphasis, which determine the primary role of the host and, quite often, the appropriate business model.

An audience is characterized by its members’ shared interest in a topic or domain. The host’s role is that of a maven, creator, influencer, or celebrity. That is, she provides access to engaging content, which can be educational, entertaining, or both.

While there can be communication among members of an audience, most communication is one-to-many: from the host to the audience. Members are acquired primarily through promotion or advertising—that is, as the consequence of messaging initiated by the host.

For example, Rick Beato is a music educator, multi-instrumentalist, and former record producer who hosts a YouTube channel that currently has more than 2.5 million subscribers. Through building an audience, making money from advertising becomes plausible. The larger Rick’s subscriber base, the more attractive his audience becomes to prospective advertisers. 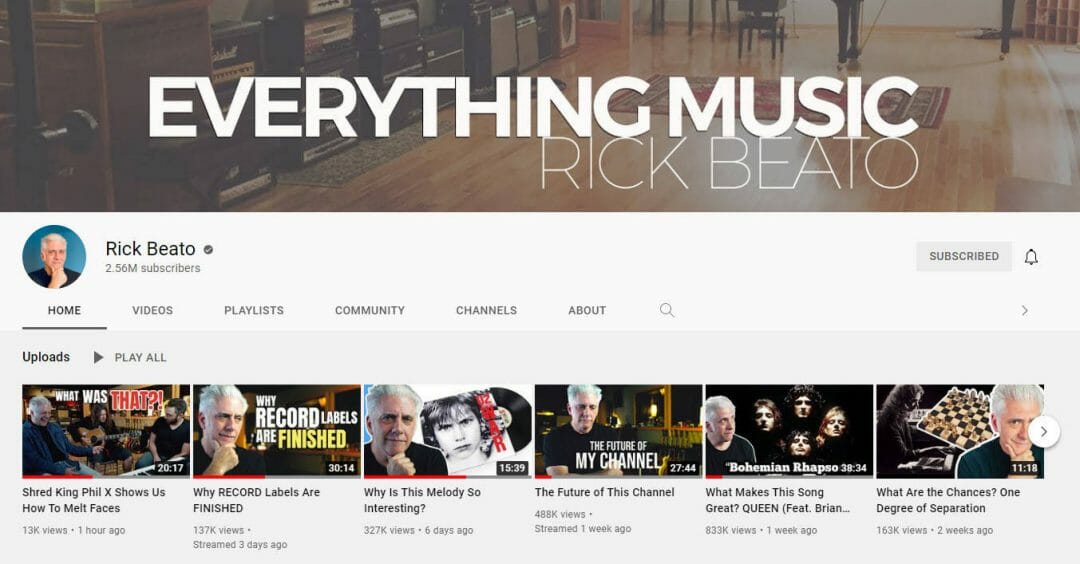 The relative emphasis on member-to-member communication differentiates networks from audiences. The ubiquity of online forums and other forms of social media make it possible for a network to emerge from an audience.

For example, Andrew Youderian discovered an audience through his blogging on the topic of e-commerce. That audience coalesced into the eCommerceFuel network centered around a lively online discussion forum. 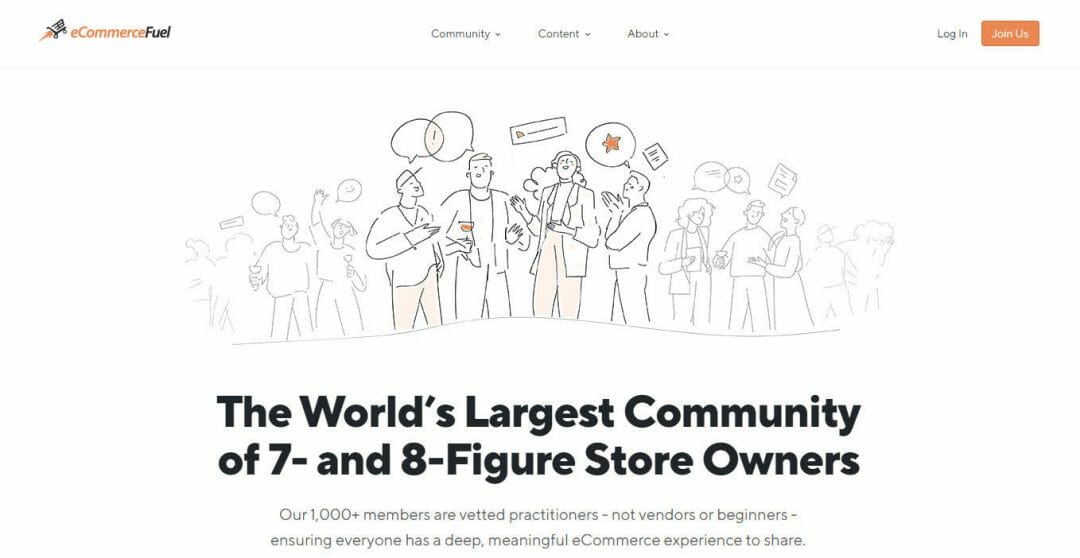 eCF, though, blurs the line between a network and a community. As host, Andrew defined the purpose of eCF (share your experience and questions with other 7- and 8-figure e-commerce store owners), which defined the people who should be “in the room.” The online forum he provides to members offers a means for members to connect. In addition, Andrew occasionally hosts in-person and other live events in which he actively brokers connections among members and facilitates collaborative conversations. In other words, eCF is a cooperative network with elements of a collaborative community.

The members of a community are motivated to collaborate in order to achieve personal and collective goals. Collaboration requires a high degree of trust among the members—not just trust of the host.

Not only does the host convene the members, but she also engages in the active brokering of connections between members having complementary skills and interests. People come to the party because they know and respect the host. They spend their time at the party conversing with others.

Unlike audiences and networks that can benefit from size, the requisite trust and collaboration that distinguishes communities mean that membership growth can erode community value. It’s a dynamic balance between having a small enough group to allow sufficient trust to develop among members and having a large enough group to ensure the cognitive diversity needed for effective collaboration.

Compared to audiences and networks, communities are relatively rare and hard to cultivate. However, they offer the prospect for membership fee-based business models and growth through referral (recommendations initiated by current and former members rather than the host).

The identity of social gatherings can morph over time. Andrew Youderian began as a maven who attracted an audience through his honest, witty, and insightful blogging about e-commerce. By defining a purpose and membership boundaries—and by providing the infrastructure of an online forum—he became the host of a network. As trust among members grew, Andrew listened to their desires for more collaborative relationships, and he began to increase the degree to which he provided proactive brokering of connections and facilitation of conversations. That is, he acted as the host of a collaborative community.

I’ve perceived a similar dynamic among the executive roundtables organized and facilitated by my friends at Profitable Ideas Exchange.

In PIE roundtables, C-level peers gather in facilitated meetings to share best practices and discuss hot topics. I categorize most of these peer groups as being on the boundary between network and community. The conversations tend to be cooperative rather than collaborative. Nevertheless, as trust builds among members, the conversations can reach deeper and shift the group into the realm of community.

Build an Audience and Cultivate Community

As a leader of an expert services firm, you are a maven. As Luk Smeyers advocates, publishing content to make your expertise visible and build awareness should be central to your marketing. That said, it can be valuable and rewarding to step out of the spotlight in order to broker connections and facilitate discussions among those you most wish to serve. By serving their needs as a broker of connections and facilitator of conversations, you can develop deeper insights into your stakeholders’ hopes, fears, and goals. By all means, build an audience, but watch for opportunities to cultivate a community.